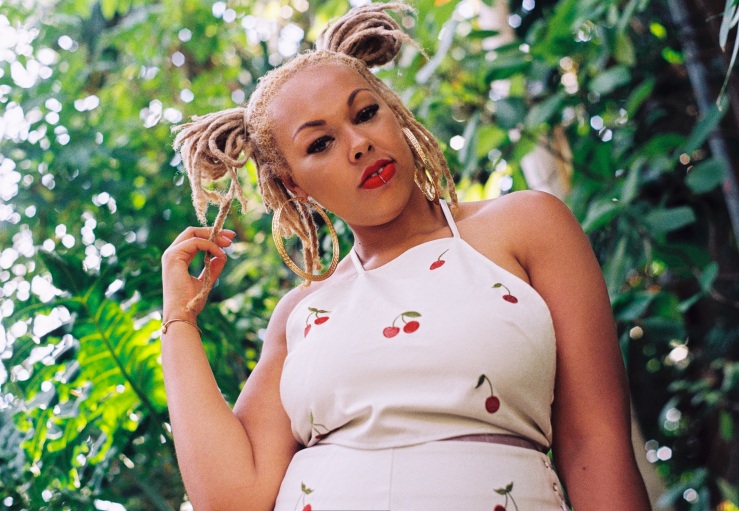 Harleighblu is a singer from Nottingham, whose work draws on influences from hip hop, soul, electronica and beyond. Thanks to a string of superb releases, including her Futurespective series, she is already forging her own path in an increasingly saturated scene. I caught up with her recently to discuss a number of things including her new project with Bluestaeb, her musical roots and surviving the industry as a female artist.

You’ve got a new project looming with Berlin based producer, Bluestaeb. How did the collaboration between you two first come about?

I first heard Bluestaeb’s music at Jazz Cafe in London a few years back and I just loved his sound. I asked the DJ who the artist was and looked him up to work with him. After a few unanswered tweets [laughs] I finally got in contact with his manager, flew to Paris, where he is based and met him. Cake was our first ever demo and we have been writing and recording ever since!

Can you give us a little breakdown of what to expect from it?

Our musical backgrounds derive from mixing old school aesthetics with a new school attitude. We blend hip hop with jazz, electronic and RnB. We hope to push boundaries with this record and it’s been described as genre defying already. Lyrically I’m the most personal I’ve ever been on this record, talking on issues I’ve never dared be so open about previously.

There are a lot of different styles and sounds at work within your music. How do you go about selecting what producers you want to work with?

I just approach who I want to work with and see what happens! I loved Adrian Younge’s music after his Ghost Face album so I approached him shortly after hearing it. His band members who worked on the album, production duo Starkiller (C.E Garcia and Alfredo Fratti) and I then started working together on some demos and eventually made our concept album Amorine, which was released on Tru Thoughts a few years back. Artistically I like taking risks and exploring new sounds, all within the soul camp but with a twist. It’s an exciting time in music now, I think. It’s easier to work with international artists if you want to because of the internet.

How would you best describe your sound for someone who’s never heard you before?

Future Soul. Because it is genre defying, but with its roots firmly within soul and hip hop.

What are you earliest musical memories? Did you grow up in a particularly musical household?

My mum has always had a huge record collection so I was listening to Jill Scott, D’angelo, Lauryn Hill, Erykah Badu from the age of 10 thanks to her. Whilst everyone else at school was listening to Busted [laughs]. My mum’s collection is vast with everything from rare groove, jazz and northern soul to neo-soul and reggae. My mum should have been a DJ! Her taste is impeccable.

Do you remember the point when you realised that this is what you wanted to do with your life?

Nottingham Caribbean Carnival, aged 10! I rapped and sang on stage with my best friend from school. We performed all our own songs. And I just knew I needed to write songs and be on stage. There is no better feeling than being on stage.

I recently saw you perform in Bristol and one of the stand out moments for me was your song, Queen Dem. How did the idea for that song first come about?

Queen Dem – derived from the word mandem – was written for the Queens and to empower women. It was an important message for me to finally express in a way I’ve wanted to, but never had the confidence to previously. We’re living in life altering times at the moment for women and I wanted to write something that captured this – and essentially make a feel good anthem for us boss ladies. Something we deserve.

I often wonder how hard it is for female artists to embrace their beauty or sexuality without then permanently being marketed or labelled as a sex object. Is that something that ever comes into your mind or that you’ve experienced personally?

Women in this industry are almost forced to be sexy, which irritates me personally. It’s a fail safe method that attracts fans; I guess sex sells. Embracing your beauty and sexuality is something different though and I respect that totally. I’ve never been one to want or need to take my clothes off though and I want my music to do the talking.

Have you had any other difficulties navigating the industry as a female artist? If so what advice would you give to anyone about to embark on their career?

You will probably have 20 men that tell you you’re a diva for making and owning your decisions throughout your career. Remember it’s your art, your career and your choices to make. You’re not a diva – you’re a BOSS!

You’ve worked with some great people already, as well as labels like Tru Thoughts. Who would be on your ideal wishlist of future collaborators?

There is so much incredible music happening right now. Children of Zeus are my absolute standout favourite artists of the last couple years for me… UK Soul, classic, timeless. I would be so honoured if I got to work with them! I’m also listening to FKJ a lot, he is truly incredible. Masego is someone I’m constantly playing also. Sir Tall Black guy is insane, on every release. KSR, a young up and coming soul legend in the making. I would also love to work with Ezra Collective for being the most badass live jazz players I’ve ever seen! And for helping put the London jazz scene on the map.

What’s next for you after the project with Bluestaeb is released?

This album has been bubbling for two years! I hope to be touring it for a long time. I also have a new Zed Bias tune in the pipeline and some wicked collabs pending. But you’ll have to wait and see…