It was already in the mid-20’s when I rolled down to this year’s High Focus Block Party in Bristol and it was only going to get hotter, given the days running up to the event. Last year’s party had been a smash and this year looked set to at least rival it, if not surpass it. Doors opened at 2pm so I got down there at about 3pm and already had to deal with the huge queue that had formed; a teeming mass of the new generation of UK hip hop fans all fully loyal to the HF brand (and all of whom I’m pretty sure I was old enough to be their dad).
Stepping into Lakota’s courtyard, things looked different from last year. For a start the stage was a lot smaller and had no cover, but as I found out from Fliptrix, there wasn’t even a stage set up when they first arrived. There weren’t even any mics. It took a lot of effort from the crew and a few runs to various studios to come up with the goods, but then the stresses dissipated and the good vibes started to roll. The line-up was another strong one and it was nice to see names like Ronnie Bosh and Dutch Mob in amongst the High Focus artists. Local MC and In The Balance resident, Chillman, was first on the bill, after a tidy little warm-up set from Fingerfood and he got things off to a good start, along with some other recruits from the Verbal Highz gang – Coosie, Goose and Entra P. 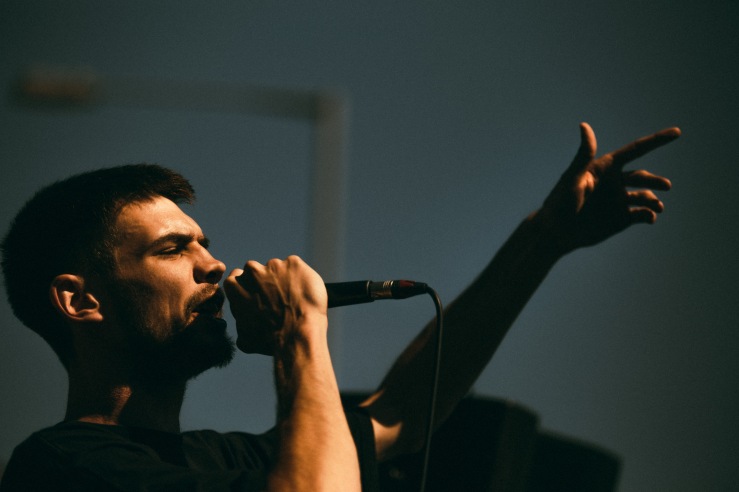 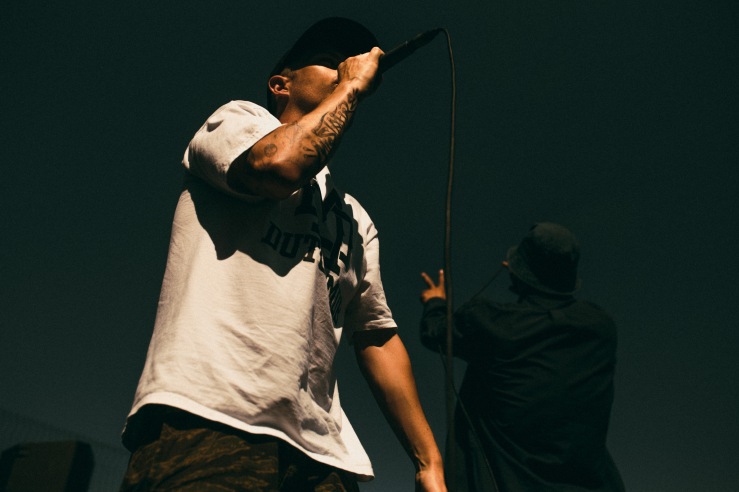 Straight after that came more Bristol-based dope in the form of Creatures of Habit – aka Eric The Red, Sean Peng and Illinformed. Definitely a crowd favourite, they played a few cuts from their debut Test Subjects LP, all of which went down well with the already sunkissed, half-cut crowd. The same crowd who lapped up the next set too, courtesy of Dutch Mob – aka Res One and Mistafire. When you have two MCs like this with a whole heap of experience on the mic and a long-standing friendship, the result is a tight connection on stage and that is exactly what you get with a Dutch Mob set. Badhabitz held down the decks and the duo smashed through a selection of bangers from their Passport EP.

Next up it was Ronnie Bosh, the first solo set of the day, but you wouldn’t even have noticed going by the crowd’s reaction. It was a great set and the first time I’d managed to see him do his thing live. I spoke to Ronnie before he played and he said he was working on a solo project, plus I heard a rumour he is forming some sort of band with Pete Cannon and Dirty Dike. That can only be as dope as it sounds, so watch out for more news on that.

The catlord Onoe Caponoe hit the stage next, with his brand of intergalactic waviness and percent symbols. He has forged something of a cult following amongst UK rap fans, which was more than evident on the day thanks to the faithful audience rapping along pretty much bar for bar for most of the set. Sticking with the intergalactic flavour, the mighty Strange U arrived next. They were always going to be a highlight for me and I think that sentiment was shared by everyone else in attendance, judging by the riotous responses to tracks like Mr Kill. Bristol has always had a left leaning political voice and given the recent developments in Westminster, the track has become more real than ever and gives us a chance to laugh at some of the things we hate. 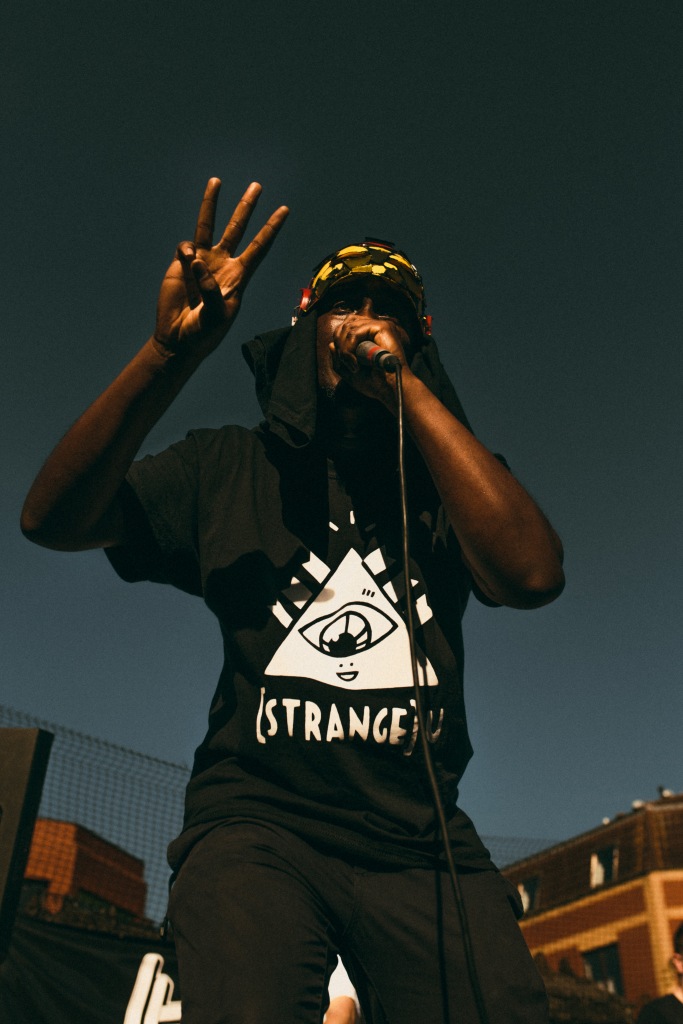 Ramson Badbonez was on good form for his set, with the trusty Jazz T on DJ duties. It had been his album launch in Dalston the night before, so extra shouts to him, Jazz and Fingerfood for holding out all day. He is another MC who has been such a favourite on the scene for years, that it’s rare his sets are going to be anything less than a hype for the crowd, especially a crowd who by this time were all pretty much wasted in some form or another. Dabbla dropped some gems in the next slot and maintained my view that he is one of the happiest artists to be doing what he’s doing. His usual tour DJ, Frosty, was on another tour with Guns N Roses on the day, but Sumgii stepped in to do his thing and given how long him and Dabs have been performing together, it was no surprises that the set flowed smoothly. It was something like the fourth time I’d seen Dabbla live in the last 12 months and each time has been a solid performance. Like I said before, the man just loves doing this rap thing and his stage presence is infectious. 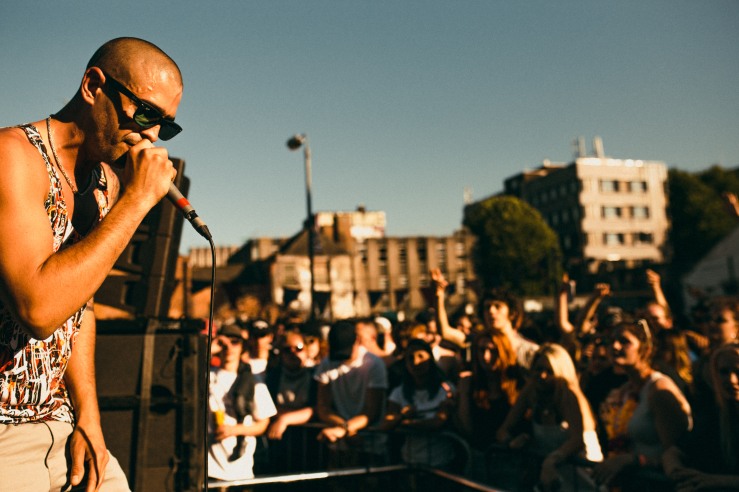 Verb T and Fliptrix continued the energy levels of their label mate, banging out a few tracks from their respective albums, before being joined on stage by Leaf Dog and BVA for an unbilled, but unsurprising, Four Owls session. By this point we were down to the last hour of the event and the crowd were in a frenzy, made even stronger by the appearance of the Owls. Seeing them perform Not Like Before was probably one of my personal highlights of the day and I’m pretty sure virtually everyone would agree with me, judging by the rows of satisfied faces pointed at the stage. Leaf and BVA carried on as a duo for the last half hour or so and brought the event to a close.
So in spite of the early setbacks, High Focus and all the artists involved pulled off another great party and proved once again that the scene is strong and unity is rife. Not sure when their next big event is, but if they roll through your town any time in the future, make sure to grab a ticket cos the vibes are guaranteed. 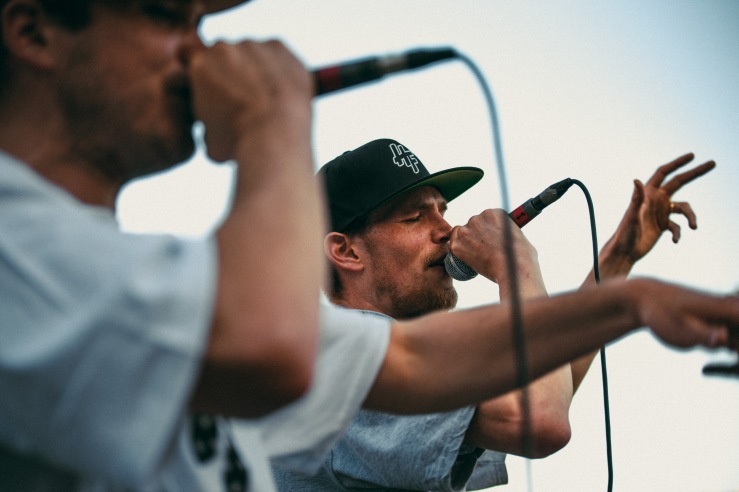